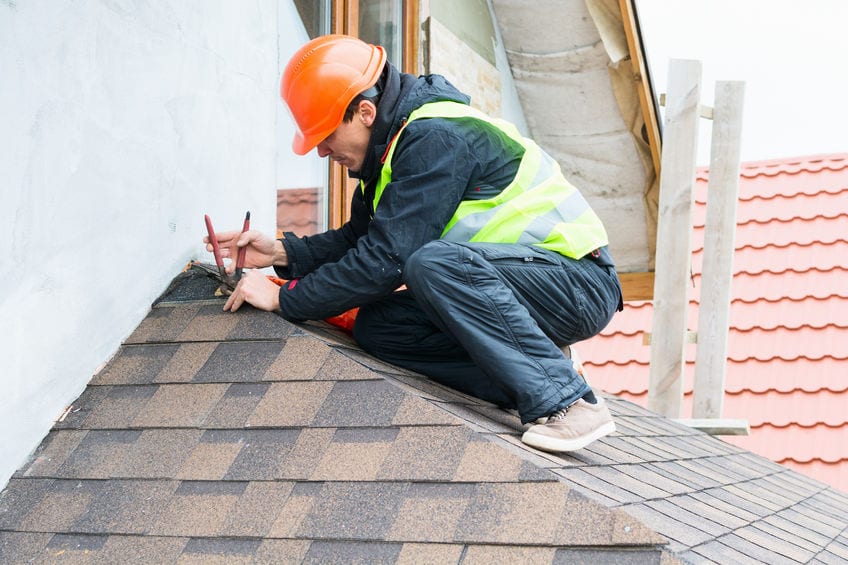 When asphalt roofing shingles are installed correctly, they require very little maintenance. That’s one of the leading benefits of having shingles. However, after many years of exposure, some repairs may be necessary. Fortunately, repairing a shingle roof can be as simple as removing and replacing one damaged shingle.

Do you need to replace some damaged roofing shingles? Today’s your lucky day. At Bay 101 Roofing, we show you how to do it in seven easy steps. Let’s begin!

1. Break the seal on the target shingle:

Locate the “target shingle” and mark it so that it’s easily identifiable.

Remove the nails that hold the shingle to the roof deck. To do so, you need to lift the shingle. Most likely, the nails are tightly bonded to the shingle with a sealant bond. If so, carefully slide a flat pry bar under the edge of the target shingle.

Pro-tip: The shingles will be stiffer in cold weather. Be careful and avoid distorting the shingles too much.

In general, roof nails can be removed directly. However, this practice can damage the shingle’s granular surface. Therefore, it’s best to lift the shingle and the nail at the same time. To do this, you must access the lower part of the target shingle.

Once you do it, slide the pry bar up tight to each nail area and pry upward. That will also lift the nail out of the roofing deck. Lift every one of the nails out of the target shingle.

Did you remove the target shingle? Probably not yet. That’s because, even when you have removed the four nails, they still penetrate the upper edge of the target shingle. The fact that each shingle on a roof keeps in place with TWO rows of nails is a crucial factor for wind resistance and extreme weather conditions.

5. Out with the old shingle:

Finally, now that you broke all the sealant bonds and removed all the nails, you can remove the target shingle.

Although the new roof shingle will probably seal to the adjacent shingles with the sun’s heat, remember to seal the new shingle manually in its place. To do this, apply three small spots of asphalt plastic roof cement under the tabs of the new shingle. Finally, press the shingle flat down in its place.

Don’t forget to seal the surrounding shingles that may have separated their sealant. In this way, you ensure a good roof resistance to strong wind currents.

Pro-tip: Do you want the new shingle to be less noticeable? Check out this little trick.

No matter how hard you try to find a shingle of the same brand and color of the old ones on your roof, the new shingle tends to stand out from the others and be quite noticeable. If the shingle to be replaced is in a very visible area, try removing a shingle from a more hidden space on your roof. Place the new tile there and install the old one in the most visible area. That way no one will notice the difference.

Roofing shingle replacement can be a simple task when dealing with one or very few tiles. However, we recommend that you hire a trustworthy roofing company in the Bay Area.

Your home’s security depends on having a correctly installed roof. Bay 101 is a team of expert roofing contractors in San Jose and the rest of the Bay Area that are ready to help you replace the broken shingles and repair your roof.

Do you want to know your roof’s current conditions? Contact us and ask for a FREE INSPECTION NOW!

We provide a variety of roofing services for residential clients in San Mateo and Santa Clara Counties, including re-roofing, general repairs, cleaning, and new construction.